In the middle of Europe is a small country called Austria. Austria boasts six national parks, one of them is known as Gesaeuse. Let yourself be carried away by the beauty of nature and visit Austria! Gesäuse National Park is with its mountainous landscape areas, whose beauty is breathtaking. The Austrian national parks is the youngest and flat over 11.000 hectares third largest. The landscape is characterized by rocks, forests and waters. Based on the many significant differences

at an altitude can be found in the National Park Gesäuse number of very diverse locations and, consequently, many animal and plant species.

Massive Hochtoru je, as well as the entire Ennstal Alps, built of limestone. Current chiseled features of this peak were formed by glaciers, previously available on its slopes. Remained after them karyHaindlkar, Tellersack, Steinkar a Schneeloch. For Hochtor are also characterized by numerous shapes alpine karst – especially škrapy and cave niches. The steepest slopes are Hochtor northeast, which are formed by 900 m high wall. Overall Hochtor rises above the valley of the Enns 1800 m 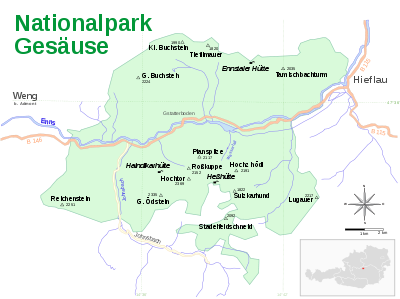